Ladies and gentlemen…The Beatles! It began its life as a Dictator’s dream but became a symbol of peace and love worldwide. It’s a pop-culture Icon that shared the screen with such legends as Kevin Bacon, Optimus Prime, and Lindsay friggin’ Lohan.

And at one point, it was the best-selling car of all time. This is everything you need to know to get Up to Speed on the Volkswagen Beetle. It’s 1934, and Germany’s not doing so great. That summer, a failed artist named Adolf Hitler Seized power after Germany’s president Hindenburg died in his home at 87.

Hitler mandated that Germany have a state car. Something the average family could afford. The German government brought the Volkswagen concept to life in a race car engineer named Ferdinand Porsche. Porsche’s job was to make a small yet big vehicle to fit a whole family, simple enough to use and maintain anywhere and dependable enough that people could drive it practically forever.

The final body design reflected a trend at the time for sleek, round vehicles. But, unfortunately, that look didn’t leave much room for a trunk which didn’t matter because Porsche did that Porsche does. So he designed an air-cooled boxer engine and shoved it in the butt. But it turned out Old Ferdinand and Komenda might have taken a little inspiration from somewhere else: Czechoslovakia.

More specifically, from the small Czech Automaker, Tatra. They saw the Volkswagen and noticed it looked a little…familiar. So they sued ‘em! And what do you do when you’re a megalomaniacal dictator who gets sued over cars? That’s right’ you invade the country and take over the factory! So then, as the totally original design came together, it was time to start building it.

Nazis are so creative In 1938, the factory began rolling the first production cars off the line. The first units were all given to high-ranking military personnel, and the first convertible was given to Hitler himself. The thing is, though, this was 1938, and Hitler needed every vehicle factory in Germany to start exclusively producing military vehicles.

So with only 210 of the original KdF-Wagens built, the factory shut down production to focus on the military effort, which would go poorly for the factory, Germany, Europe, and the entire world. Cut to 1945! When the Second World War ended, Germany was a pile of rubble. The Fallersleben factory had been bombed.

The occupying British forces in charge of the area found the original production line parts for the KdF-Wagen. British car makers were invited to bid on the production line parts to mass-produce the vehicle back in the UK. But nobody wanted it! “Ok mates, ok chaps,” “I have production parts of a shitty little Nazi car,” “Going for one million pounds,” “One million pounds, can I get one million pounds?” “I don’t know about you mate, I think that car is ugly and slow” “I agree entirely mate” “Would you like to go get some tea and custards?” “Ooh I love tea and custards” “Let’s go to the Buckingham’s” “Buckingham’s is my favorite tea and custard shop” “So should we take your carriage?” “Right right” “Right right” In 1946, the factory was rebuilt after the city was renamed “Wolfsburg.” 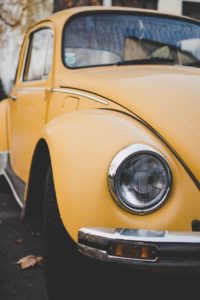 Since the British didn’t want to take it, the production line was reassembled, and cars started rolling. No more Strength Through Joy: the car was now simply the Volkswagen Type 1. Once again, the first models were given to military personnel, which was time for the occupying forces. Finally, in 1949, the British handed off control of the factory to an ex-Opel executive named Heinz Nordhoff.

With the factory rebuilt and Germany as a whole slowly coming back, the new company, called Volkswagen, was ready to live harmoniously with the rest of the world. So the Volkswagen Type 1 started selling around Western Europe, including its native Germany, where it first garnered the nickname ‘the Beetle.

‘ But Europe in the late ‘40s was still recovering from those of heads Nazis. If you wanted to sell to a market with a big population, lots of money, and roads that weren’t all blown up, you had to go to America. But at first, no dealership in the US wanted to touch the little car. The Beetle only had 24hp, it looked weird, and when you pressed the horn, you would hear Hitler screaming ‘Nein Nein Nein!’ Volkswagen’s first few efforts to sell in America went nowhere.

VW managed to get a few dealerships to take on their cars in 1950. And against all expectations, the little Bug started to sell. First, the car WAS cheap, much more affordable than most other cars on the market. Second, it was a rugged and reliable machine, even on unpaved roads. Third, if it did break, the repair was relatively simple and inexpensive.

The people’s car became the people’s choice. By 1955, eight years after going to market, Volkswagen had sold one million Beetles. Meanwhile, its simple construction made it easy to custom re-engineer at home. In particular, outdoorsy types stripped the Bug way down to make a tough, light vehicle for crossing sandy areas like deserts or beaches.

What did they call a Bug that drives on dunes? A dune buggy. Dune buggies became a pop sensation in their own right, especially in California surfer culture dude. They would cut off the car’s whole body, put a new fiberglass body on it, and rip up the beaches, pulling tail. “Hey guys, wanna hit up old man’s? I heard it’s got pretty good swells right now” “Who was that?” “That’s Jason, he’s like one of the best surfers on the whole beach” “He’s really cute,” “I know, real dreamboat,” “Yeah” “But you know what I heard?” “What?” “He has herpes.

..” Suddenly, Beetles were cool. In 1972 Volkswagen produced its 15,007,034th Beetle. They threw a big ol’ party for it at the factory. Why did anybody care about this random number? Because that was exactly how many Ford Model Ts were ever produced. And that made the Beetle, the best-selling car of all time! Honestly, I bet it wasn’t much of a party “Congratulations on the big number!” “Thank you.

Back to work?” “Back to work” Even though sales were good. Its days were numbered. Volkswagen saw the need for a modernized replacement and released the Golf in 1974. The Golf was a small, cheap, and reliable people’s car but made nearly double the horsepower and, you know, wasn’t designed by the most notorious mass murderer in the history of the planet.

Buyers around the world shifted from the Beetle to the Golf pretty quickly. And by ‘around the world,’ I mean ‘Everywhere except Mexico and Brazil,’ where apparently the people loved the Beetle so much that they refused to stop buying it. As a result, the Beetle was produced in Mexico until 2003! In the end, the Volkswagen Type 1 sold 21 million units worldwide.

And its core tenets of simplicity, dependability, and affordability inspired a whole new category of cars from makers around the world. So in 1998, Volkswagen decided to bring the icon back to life, in the first major refresh and update in the Beetle’s history. As it was called, the New Beetle was a more modern machine with 115hp and a nicer interior.

Underneath, it was basically a Golf. The New Beetle captured interest the world over, and pretty soon, a shiny Beetle was a common sight once again. Then, in 2001, Volkswagen decided to really push the car and made the limited edition RSi, which got 221hp. This lead to a full production run of the Turbo S, which featured ‘ you guessed it, ‘a turbocharged engine capable of 180hp.

1 point 80! Never lose! And Volkswagen still produces the New Beetle today. The Volkswagen Beetle is the little car that could, the pipe dream of a tyrant that charms the whole world and becomes a symbol of love. Whether riding around on roads or dunes, it could be found in nearly every country on earth. 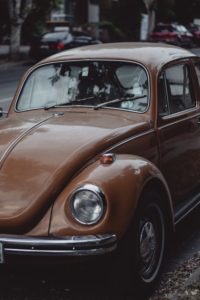 It was a sales sensation; it’s still a pop culture icon. But, no matter how far it’s gone, it has never forgotten its roots. Well, I mean, most of them. So shout out to Skillshare for sponsoring this video! Are you struggling to make a new year’s resolution? Maybe you’re sitting there on your butt thinking, “well gall dang, I wish I could effortlessly present everything about cars off the top of my like this guy does! I wish I had some kind of marketable skill like that smart, handsome, sexy James Pumphrey…” Well, you’re in luck! Because Skillshare is a thing, They’re here to help you learn to be a better you for 2018 and beyond! Skillshare is an online learning community with over 18,000 professional and easy-to-understand classes in film, writing, design, and much more! Premium Membership gives you unlimited access to high-quality classes from experts working in their fields, so you can improve your skills, unlock new opportunities, and do the work you love.

For example, this class by Soledad O’Brien- she’ll teach you powerful strategies for crafting great content! Just like your boy, Jimmy to the Pump… James Pumphrey Skillshare is also more affordable than most learning platforms out there: an annual subscription is less than $10 a month. All you have to do is click the link below to get the first 3 months of Skillshare for just 99¢, or you could type it in but however you get there… go sign up at this link.

This offer is only good through the end of January! You know how many new year’s resolutions you could tackle in 3 months?! You could start your own frickin’ channel with all your new skills. So don’t wait, dummy! Do it. Do it! Get skilled with Skillshare! I freakin’ dare you dude. This is everything you need to know about the Volkswagen Beetle Bug, love bug. Oh, there goes a beetle! Why is that a thing? Why does the beetle come on the flower on the dashboard? Do they still? It’s stupid.

Oh, follow me on Instagram: @JamesPumphrey If I get 10,000 followers, I will pick one at random and send them something weird It probably won’t be car-related, and it might be perishable, and it might have been grown on my body. Got a lot of new shows coming out: Mondays, we got “Wheelhouse,” Tuesdays, we’ve got “Matt Field’s FD corvette build,” Wednesdays, we have “Science Garage” with Bart, Thursdays, we’ve got this f’in’ show, and Fridays, we have “Tony’s Top 10”.

Watch all of them. It’s all funny. It’s all educational; it’s all Donut. Those guys are all my friends. If those shows are successful, then I’m successful. Hitler is probably the only guy that I hate more than my dad. Hmm…I don’t hate my dad; I miss him. I don’t miss Hitler at all.