Bo Diddley was an influencer of many of the founding fathers of rock.  His birth name was Otha Ellas Bates.  It was in the deep South, in McComb, Mississippi, on December 28th, 1928.  He later took the name of Ellas McDaniel when he was adopted by his mother’s cousin and moved to Chicago’s South Side.

Ellas learned music at the Ebenezer Baptist Church.   He mastered the trombone and violin first before taking up the guitar.  And oh, what a guitarist he would be!  Like many musicians, he started out gigging in Chicago clubs as a sideline.

Image: In the 1950s, Bo Diddley had a square guitar custom-made. He’d go on to make guitars of all shapes.

No one is really sure where the name Bo Diddley came from.  He says that it was a name given to him by some pals when boxing in the Golden Gloves.  He suspected that it was an insult, but he also noted a stage name previously used by a comedian related to his mother.  Wherever it came from, it stuck.

On November 20, 1955, his musical stardom was when he appeared on the popular television program The Ed Sullivan Show.  In the 1950s, when you hit Ed Sullivan’s show, you were a star.  Unfortunately, there was some confusion with Sullivan’s staff, and Bo ended up performing an as-yet-unreleased “Sixteen Tons” along with “Bo Diddle.”  Sullivan was angry and never invited him back.  Bo Diddley went on to record “Sixteen Tons,” and we’re still listening to it today.

This article won’t go into his discography and professional accomplishments.  There’s plenty of that on the web.   We’ve included him here as a member of Rock royalty and one of the founding fathers of rock and roll. 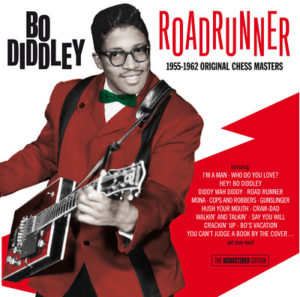 His special way of playing the guitar, using it almost like a percussion instrument rather than for melody or harmony.  It was an African rhythm that Bo Diddley transitioned into American R&B, which is the basis for today’s Rock and Roll.  The Bo Diddley beat is heard in many other early rockers, notably Buddy Holly,  Elvis, The Beatles,  the Stones, and others.  It’s grown to become the backbone of today’s hip-hop and rap.